There are few things more rewarding and relaxing then spending an afternoon looking out at a gorgeous view while tending to a dutch oven full of goodness.  It seems that is how this year’s installment of caveman cooking begins.  This year the challenge was not breakfast but spareribs; the only requirement I received was they had to be tender.  Mission accomplished.

Cooking in a dutch oven is not necessarily my forte, I mean it is primitive, but sadly my dutch oven is probably the least used weapon in my cooking arsenal.  Unlike the smoker, you can’t just set it and forget it (more or less), it requires constant devotion, and that presents a challenge at home when I usually do not have hours on end to babysit the pot.  Sadly.

Given the opportunity to give the dutch oven a try, I left the smoker at home and busted out the pot.  It is vacation, days are supposed to be spent doing the stuff you don’t have time to do at home like fishing, relaxing and yes, tending to a dutch oven. 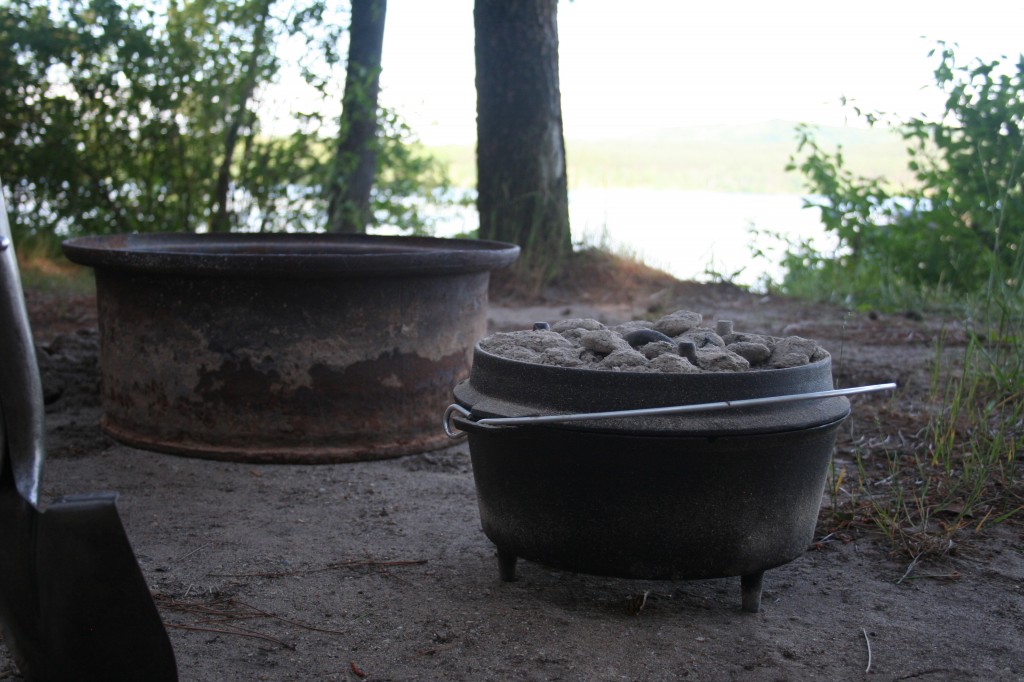 To get started I had to do battle with the wind. First I dug a hole a few inches deep and a few inches wider than the dutch oven, then, grabbed the neighbors fire ring to act as a wind block.  Wind problem solved. 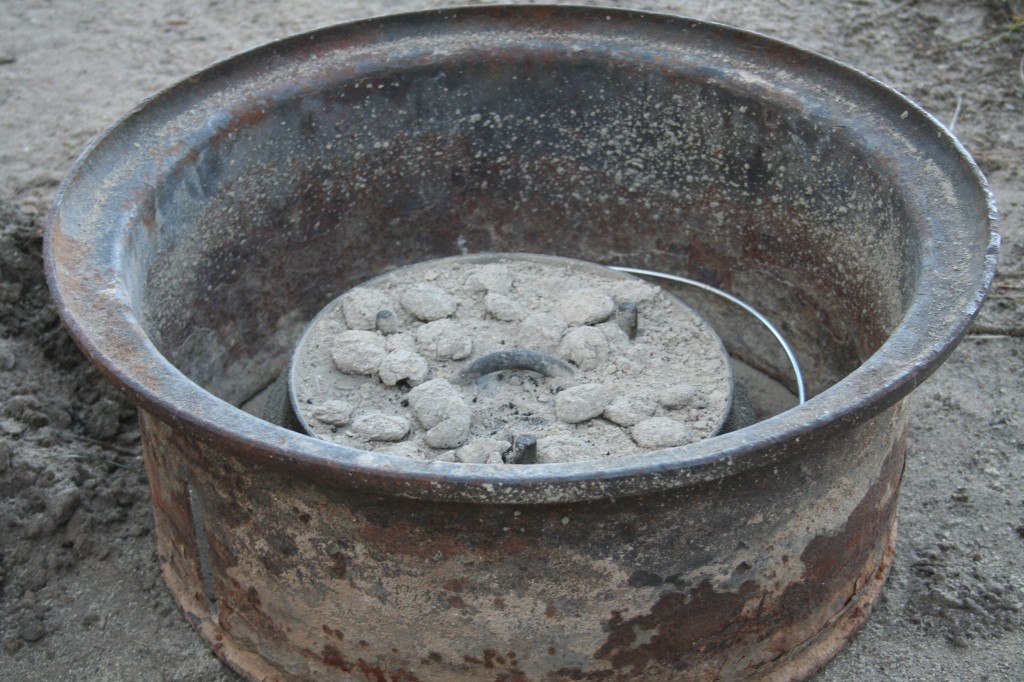 Next, I fired up 22 coals in the charcoal chimney and got ready to cook.  For every coal I put on the lid I put two underneath the oven in a checkerboard pattern.  From there, every 25-30 minutes, I added 6 to 8 or so fresh coals following the same distribution and rotated the oven half turn and the lid a half turn the other way.  There is a handy dutch oven temperature calculator you can find here. 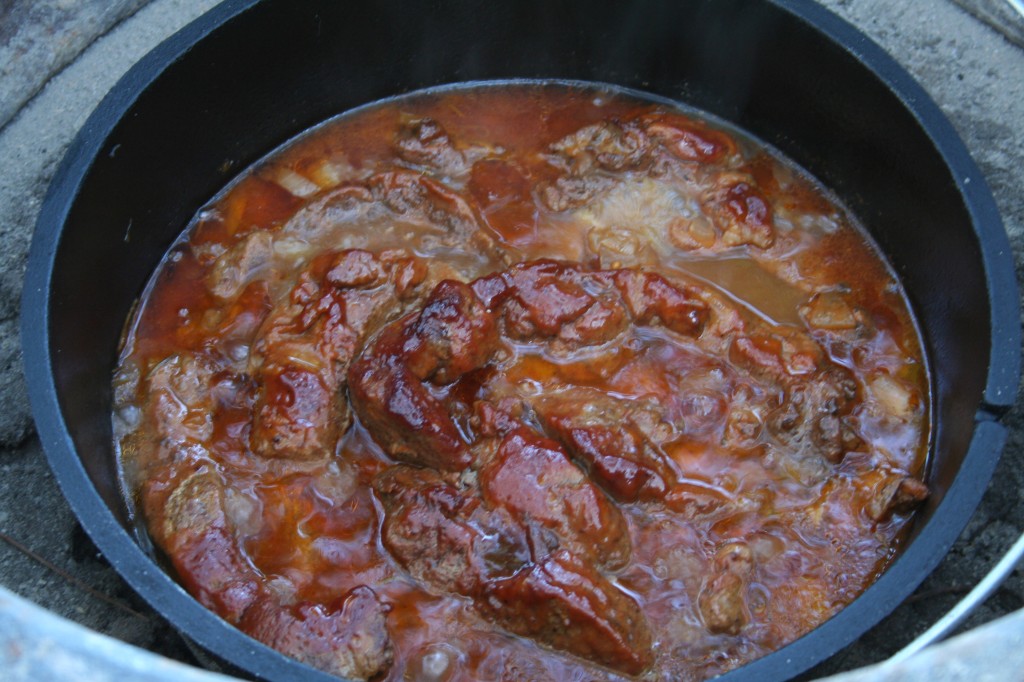 After two and a half hours of this madness and the constant whiffs of amazing smells coming from the pot, it was time for phase two, the fire.  This was where we were to finish and give the ribs a nice outward texture.  While maintaining the coals on the pot, I had been building up a nice bed of cherry wood coals to finish the ribs on with a bit of BBQ sauce. 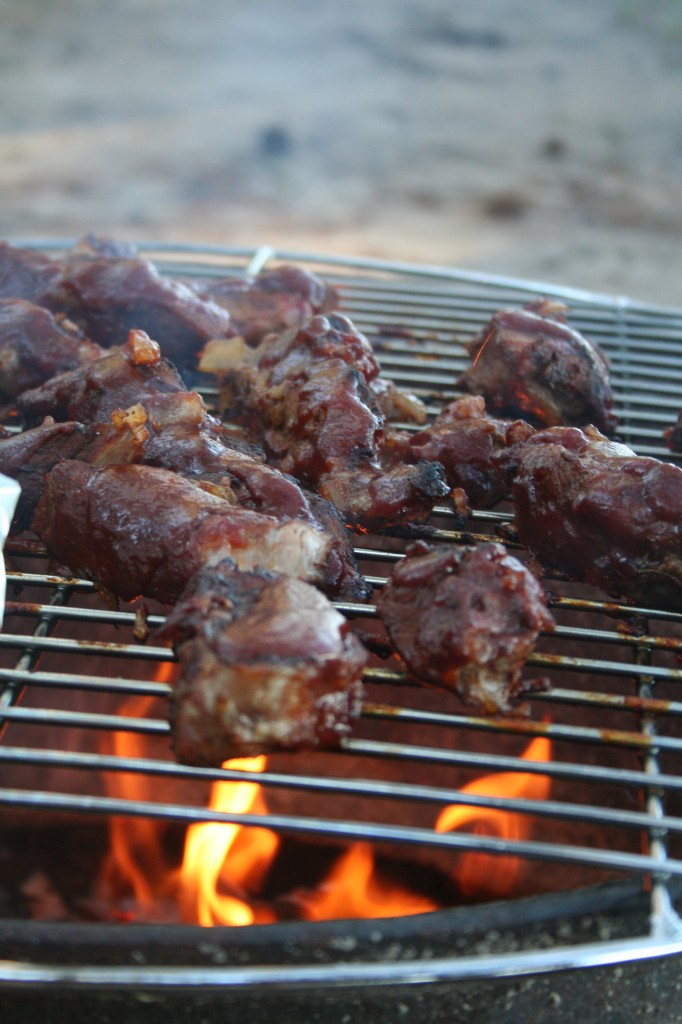 Once the ribs had taken on a nice set of grill marks and soaked up some cherry smoke, they were ready and tender!  So, when it was all said and done, there was really no recipe it was a cobbled together bit of whatever came to my mind goodness but here is my best stab at it.

Instructions
Make a rub using brown sugar, chile powder and sage.  Mix thoroughly and rub into all the meat.  Set meat aside.  Combine remaining ingredients with the exception of the bbq sauce in the dutch oven with a cup of water add meat and top with a bit of bbq sauce.  Cook meat in the dutch oven until it falls apart over low heat (250-300°F), about 2.5 hours and finish over and open fire or on a grill with some more bbq sauce.  Let rest for about 5 minutes and enjoy.

After another successful yearly installment of caveman cooking, the novelty has not warn off.  Cooking with nothing but fire is rewarding, its natural, its primitive and its time consuming.  But at the end of the day, its worth it. Its a blast and you can almost taste the effort in the food.

Happy Independence Day! I have leftovers to eat!

If you are looking for more dutch oven recipes, get started over at Jen Reviews with 35 Incredibly Easy Dutch Oven Recipes for Camping, personally the cinnamon rolls wrapped in bacon are calling my name.