By Nate Elston Posted on August 18, 2010 Posted in Preserving the Harvest, Recipes 4 Comments 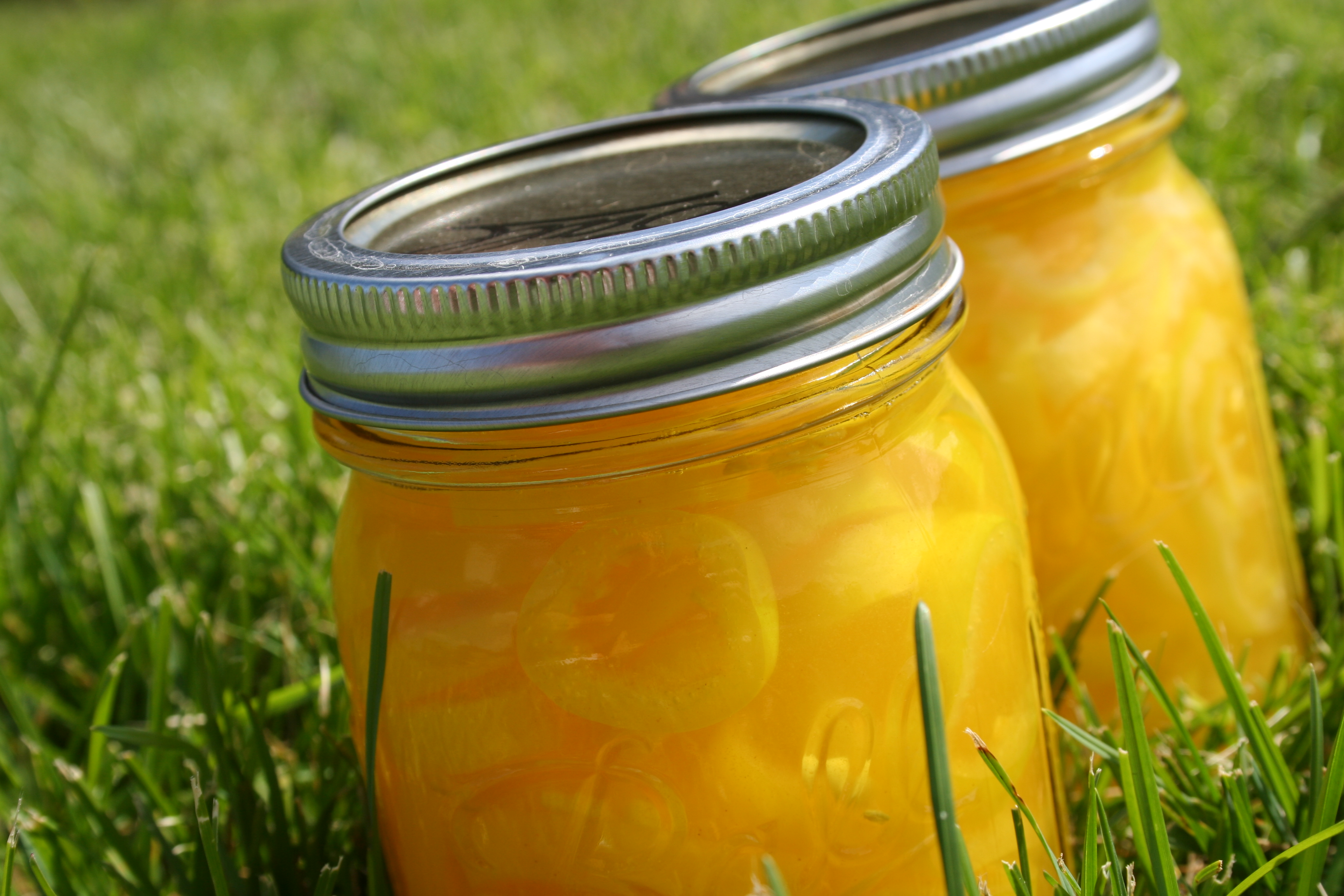 I hate to be the bearer of bad news, but summer is winding down, it is coming to an end and in Michigan that means harvest time.  Gardening will be done in another six weeks at most  here in Michigan and right now the bulk of the harvest from my patio garden is ripening, and it is way more than we could possibly consume  before it goes bad.  That means one thing canning. 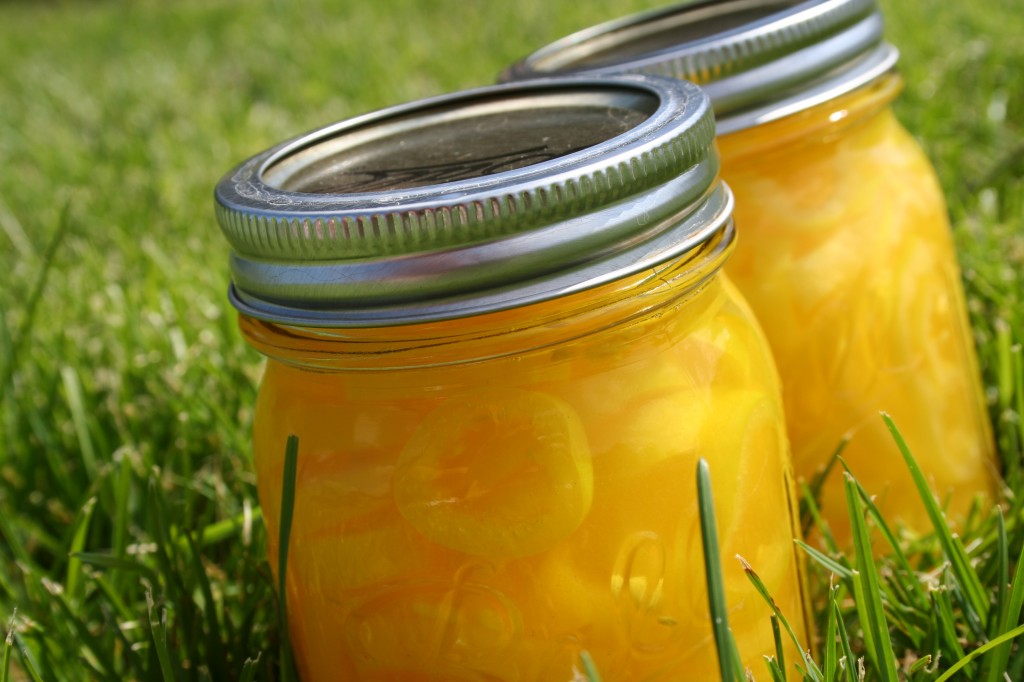 This is the first year I have grown Banana Peppers, my mother-in-law introduced them to me on pizza and they have been a must have since then.  So when the rabbits destroyed my plants this year, I went out and bought one from the farmers market and low-and-behold they are resilient little plants.  Soon after potting my plant from the farmers market the other two sprung back to life and have grown like weeds ever since.

Being the first year I have grown Banana Peppers this is also the first year I have canned them, I found some recipes online and did a best of both worlds (at least I hope) of the recipes I found.  What I ended up with was a visually pleasing jar of canned Banana Peppers, that in spite of several warning I tried before the advised 5-6 weeks tasted pretty much like what I expected.  The only difference is my expectations we based on what you get in the store and these have so much more flavor.

So without further ado here is the recipe per pint jar, I canned them as they came in as opposed to one big batch at a time and only wrote down the recipe I used per jar.

Instructions
Place turmeric, salt and vinegar in a sauce pan and boil until salt if dissolved.  If you have not done so already, slice peppers into rings.  Pack garlic and peppers into a hot sterile jar, cover with vinegar solution leaving 1/2 inch head space.  Remove air bubbles with a non metallic utensil.  Cap jars and process in a hot water bath for 10 minutes.  Remove and let cool.  Let sit for 5-6 weeks before eating (they are good before that too).

I also did jalapenos the same way, just omitted the turmeric.  They also turned out great.  Check back soon to see what else is cooking.

UPDATE: Make sure you add a pinch of alum powder to each jar or you will have mushy banana peppers, I did not do this with the first batch and they soon turned mushy. 🙁

By Nate Elston Posted on June 23, 2010 Posted in Uncategorized No Comments 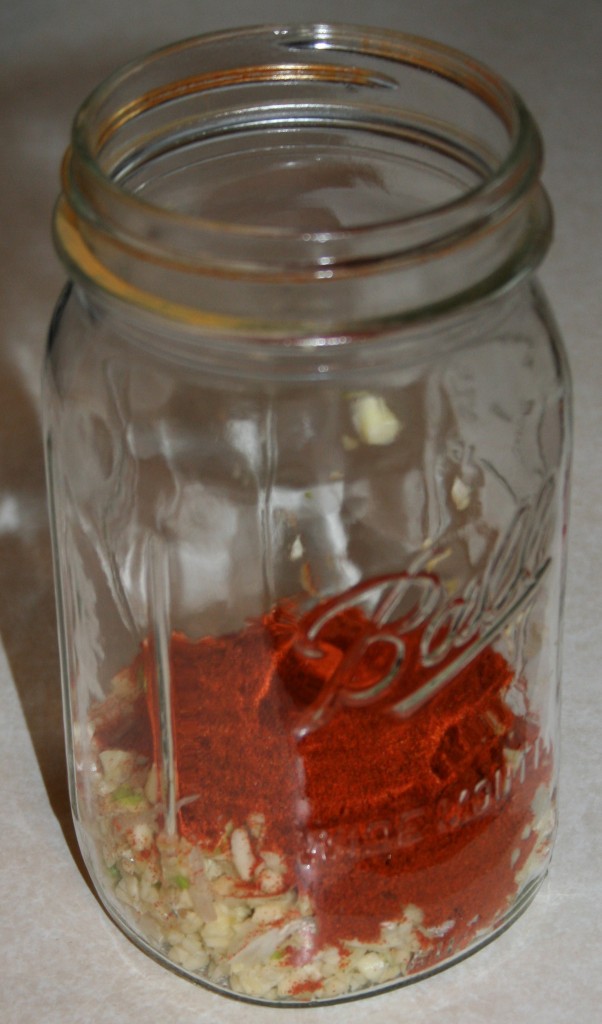 So this year I have been plagued by a problem I did not have last year, rabbits, huge rabbits.  That eat pepper and tomato plants, I didn’t believe it at first but after they ate half my crop of pepper (hot) plants completely off and were working on my tomatoes.  I had not had this problem previously so it took my by surprise.  After some quick looking online I surmised that rabbits don’t like garlic, hot pepper (go figure) and rotten egg.  Well I don’t like rotten egg either so I whipped up a potent mixture of the other two and let it stew.

I put 5 whole heads of garlic chopped finely in a quart jar with 3 tablespoons of cayenne and a bottle of tabasco.  I then filled the rest of the jar with water, covered and let it sit out and stew at room temperature for two days.  Then I uncapped it and it smelled like garlic and hot pepper, it almost smelled good enough to try it.

I then diluted it 1/4 cup of the mix to a quart of water, strained it and put it the spray bottle and applied it liberally to my remaining peppers and tomatoes.  So far it seems to be working, my sprayer is a little clogged but next time I will use a coffee filter or something else to get the chunks out when loading up the spray bottle.

Until I get somewhere where rabbits can be shot at will or trapped and released into the yards of unsuspecting victims, I will have to stick to the dragons milk until the rabbits change their taste.