By Nate Elston Posted on June 17, 2014 Posted in Gardening No Comments

Sadly this seems like a theme, it’s been a while, I will get better I promise!  I did spend some time revamping the site this spring with full intention of writing again and well here we are almost a full year after my last post begging for forgiveness once again.

We have been cooking up a storm, lots of from scratch dishes, some  incredible and some mundane, but I don’t have any of them to write about today, instead I wanted to give you all a little life update, its been a busy six months in the Elston home, a lot has happened.

First we bought a house, well not just a house, a house and a barn and a shed and a couple of acres – in the country.  We came across our house last fall and proceeded to move in just in time for deer hunting and then winter.  The deer season was good to us this year and we ended up with a couple of deer in the freezer that we have been eating ever since – the winter was not so good to us though.  It was a tough initiation winter in the country, I had never actually been snowed in before and I can now say I have, multiple times.

You see our real snow started out in early January, we had a few inches here and there before that but my real initiation took place on my way home from a successful hunting trip in Ohio, woke up that morning and hunted it was 40ºF when I hit the stand and 0ºF when I left the house to head home a mere four hours later, the typical seven hour drive home took about twelve and by the time I was on hour two the car thermometer reminded me that it was -40ºF outside.  All through Ohio, Indiana and into Michigan it was snow, blowing snow and cold.  On one stretch of highway I went 60 miles without seeing a car.  But nothing compared to the fun I had once leaving the highway to make the last few miles home.  I captured that with my cell phone (leaned up on the dash not held in hand).

Usually in Michigan we get a snow, it melts and then we get another snow or we get a few snows they melt and then we get a few more.  Not so this year, we got snow, and then snow, and then snow and then snow.  In fact between the snow and then wind we ended up several times with so much snow in our driveway that you could not push it will a full size pickup with a plow and it had to be dug out by hand, which is a not fun task.  You can see the results of our repeated blows here, which at this point they had come through with a loader and opened the road back up to two full lanes of traffic, you can also see our snow piles – which continued to pile up all through March.

And if you get bored there are plenty more winter videos on my YouTube Channel.

And so winter went, not only were we stricken with snow but we were over run by mice, catching seventeen in one week.  We did our best to get the mouse problem under control but not in time to save our seed starts in the basement which the mice decided they would be happy to eat, thanks mice.  So we tried again to much the same result and when winter finally loosened its grip we gave up on the seedlings and planted straight in the ground for a lot of things.

But I am ahead of myself, with plenty of room for gardening we decided to put in our main garden and I say main because we also have an experimental garden behind the barn, but we decided to put our main garden on the properties southern most edge as it was most suitable to be tilled, or so I thought.  After eight hours with a walk behind tiller, literally dozens of rocks and bricks removed we had a tilled garden. 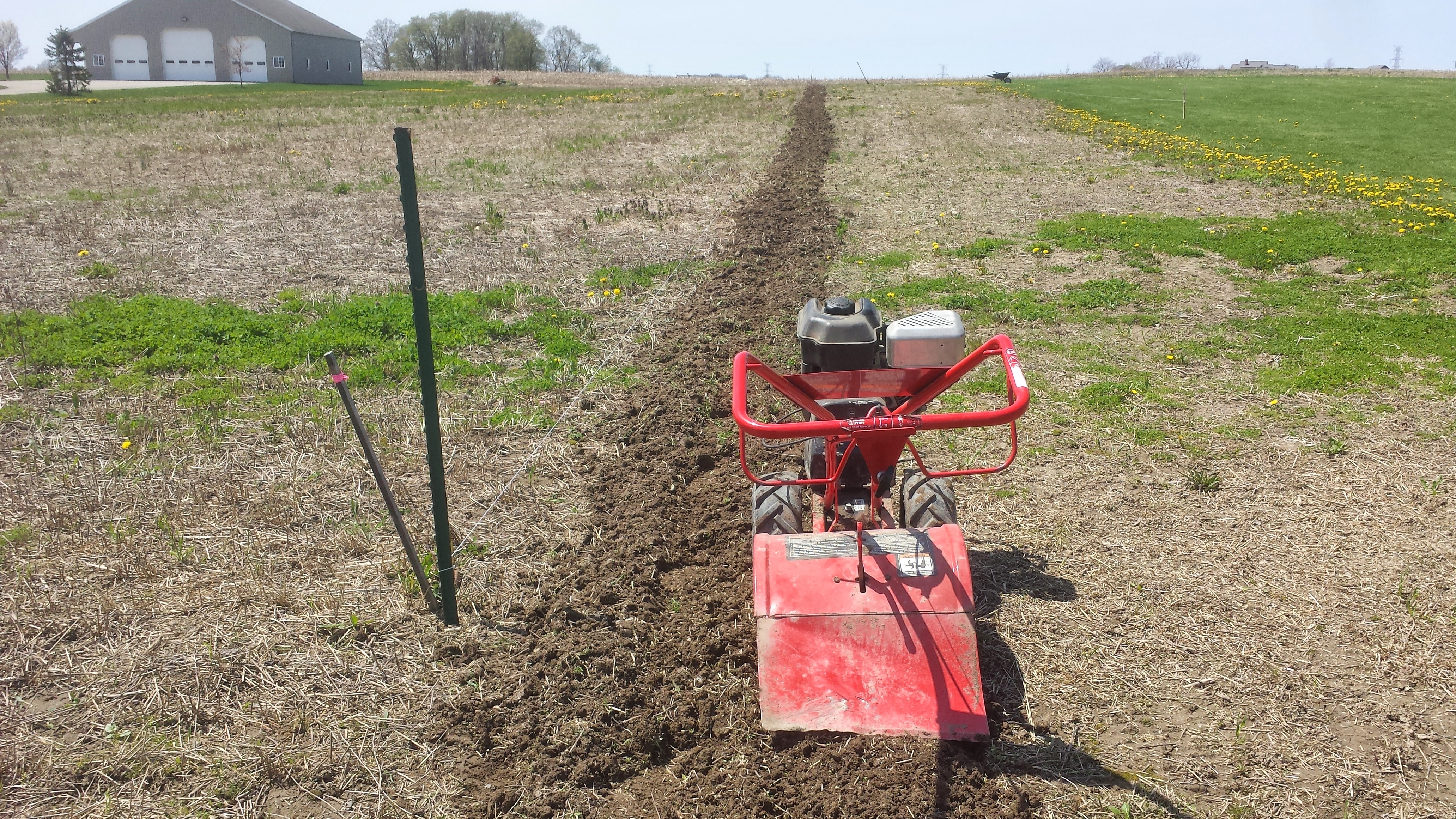 And now we are stuck with the challenge of watering all that space, which is a challenge because after 250′ of hose to get the water out there we don’t have good pressure, we are now on our third type of sprinkler to try and get decent coverage.  If anyone has any recommendations, send them our way!

And because of all of this, I, based on lots of feedback am moving away from a food blog and moving into a more comprehensive blog of what is happening in our little corner of Hamilton.  For instance, we bought a house on a hill but for some reason still have a wet basement and a constant puddle behind the barn – so this past weekend we put in drain tile and perhaps the moment most worth noting was the planning and the redneck laser level to make it easy to figure out where we should stay consistent with the trencher and where we should aim to go a little deeper.  So I will leave you with a picture, that is worth a thousand words, sometimes you don’t have the right tool for the job but you can make one that will do the job just as well with what you have (the yellow on is actually a laser level) 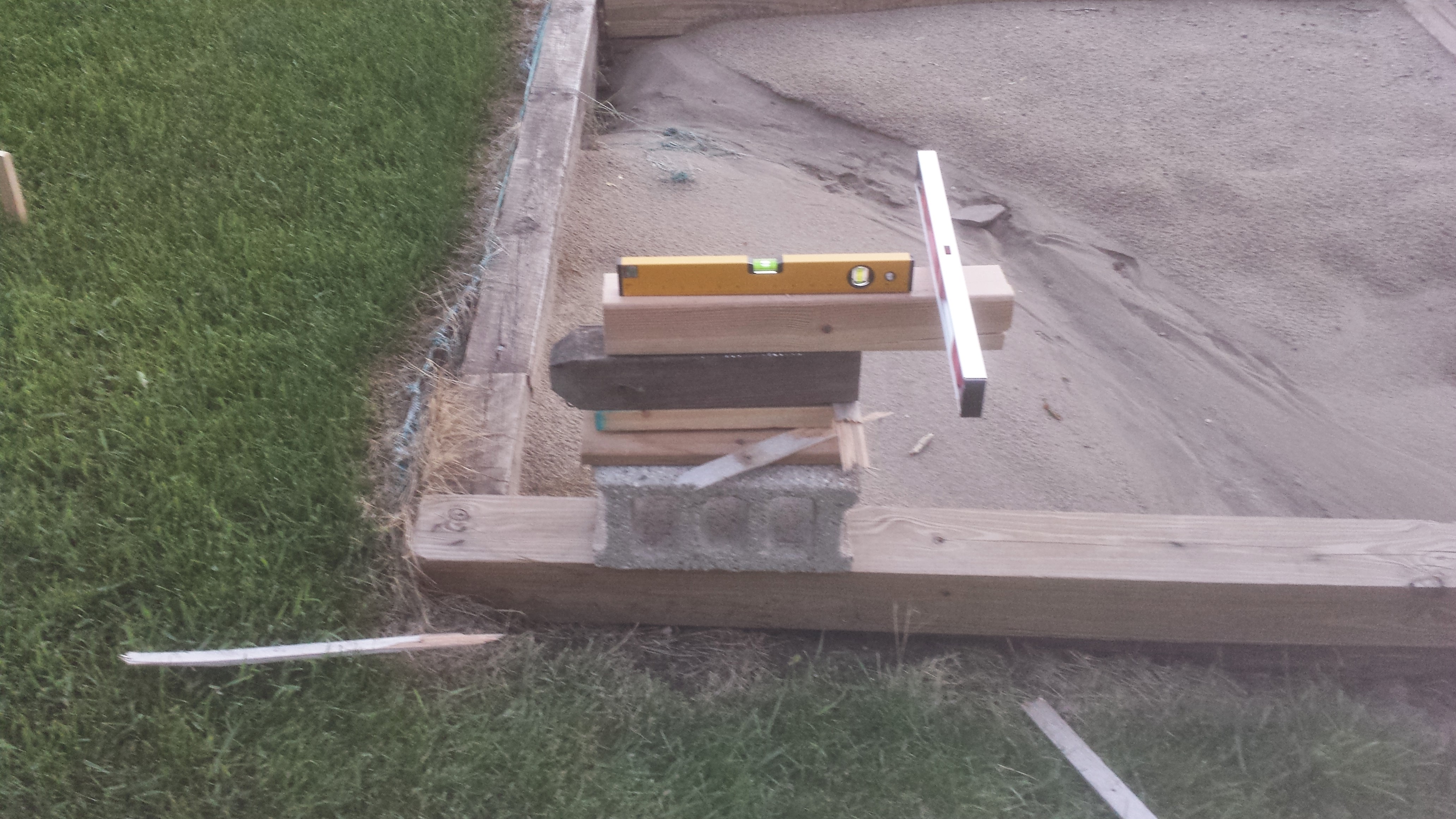